I’m delighted to say I’m going to be at Electromagnetic Field Festival next month (2nd-5th June). I’ll be doing a talk on building digital effects, and also playing the Main Stage at 10pm on the Sunday. I’ll be showing off some of my latest projects, DaisyDrone and Gloop.

Both DaisyDrone and Gloop are projects built around the Electrosmith Daisy Seed. It’s a compact dev board, similar to Teensy, but with high quality audio built in. It also has an enormous 64MB or RAM on board. More than enough for most audio projects I can conceive.

DaisyDrone is a drone synth, with 6 sliders, Inspired by @hainbach101 ‘s use of vintage oscillators and test equipment. This combines 18 sine waves. Each slider controls the gain of a set of 3 sine waves at slightly offset pitches centred around a frequency within the key shown in the display. The frequency of the sines increases from left to right. The magic comes from the way they are summed (controlled by the 3-way switch). Either averaged (boring!), or wavefolded with a sine wave or a triangle wave. The wave folding produces the rhythmic elements. An encoder is used to set the note of the base frequency, displayed in the 7 segment display.

Gloop is a looper which is RAM based rather than my previous SD card based looper. This gives a lot more flexibility to glitch up the audio, as you can jump around in the stream a lot more. It takes inspiration from the GlitchDelay. Once a loop is recorded (overdub is supported), you have 4 read heads that can play from it simultaneously. Each read head supports forward and reverse play, varying speeds (which can be quantised to semi-tones), and the ability to have micro loops which jitter within the main loop. 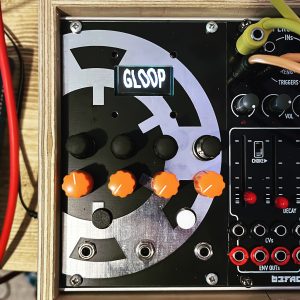