For my gig at Thee Sunday Sonics this weekend I decided to make a new USB controller. I was previously using one with many more buttons and knobs than I actually needed. For this project I used the Teensy LC. A low cost version of the Teensy (around £10). It has less memory and computation power than the 3.2, but more than enough to make a simple USB MIDI controller. I used a mustard tin to house it all in. It’s suspended inside using these. It worked a treat in practise but for some reason on the night of the gig (typically), in soundcheck it stopped working and seemed to be interfering with my other controllers. Luckily I bought my previous controller as a spare. Still not entirely sure what the issue was (it works fine again now). My best guess is that there was some form of power issue. I’m hoping to be able to recreate in an environment that not on-stage so I can actually resolve it. 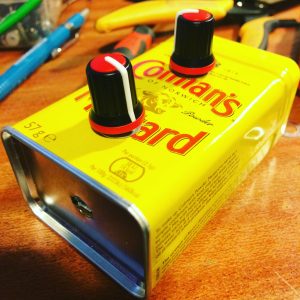 Once I’d reverted to my spare everything was fine, and the gig went well. Thanks to Thee Sunday Sonics for inviting me, it was lots of fun.