I’ve had a couple of interesting comments on my AudioFreeze/Glitch Delay module which have contributed to revising the PCB, details of which can be found here. 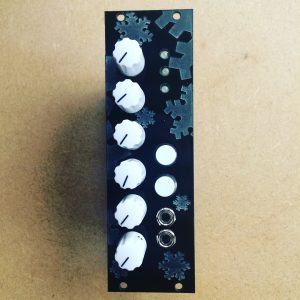 Reducing the size of the PCB

Getting rid of the PIC chip reduced the number of components, which meant the PCB could be smaller. Also, I split the module into 2 PCBS. One which has the Teensy on and the audio and power circuits, the other has the interface, the pots, jacks and buttons. The PCBs stack, separated by header and copper spacers.

The previous version of the board employed a PIC chip to read all of the potentiometers and pass the values back to the Teensy via I2C. It transpired it was possible to achieve this all on the one board, see here for source code. The ADC library for Teensy allows you to access the 2 ADCs on the 3.6 individually. There are currently a couple of issues with this in the Teensy libraries. One of them is that it’s very important the ADC is initialised before the Audio Library (see struct IO – this enforces initialisation order). Secondly, the Audio Library runs at a reference voltage of 1.2V. Because the potentiometers are connected to the 3.3V line, you need to set a different reference voltage for the 2nd ADC. There is functionality to do this in the ADC library, but it doesn’t work (for a couple of reasons, which I’ve raised on the Teensy forum here). I fixed this by setting the registers directly (see set_adc1_to_3v3())

The previous board also had issues where it just wouldn’t start up when connecting to certain power supplies. It turns out, this is due to the time it takes for the 12V line to stabilise. If it takes to long, the 5V line won’t be at 5V whilst the Teensy boots, and it crashes. This explains why, if I powered the Teensy over USB and Eurorack power, then removed the USB, it solved the problem, although felt like ‘jump starting’ it, like an old car! Thanks to the Teensy forum and BCP Music for this information

. The solution was to use a voltage supervisor (MIC803). The keeps the Teensy in ‘reset’ until the supply has stabilised.

So far I’ve made up 3 of the PCBs, all running different firmware (shown here in a DIY case, with a combination of aluminium and laser-cut acrylic panels). 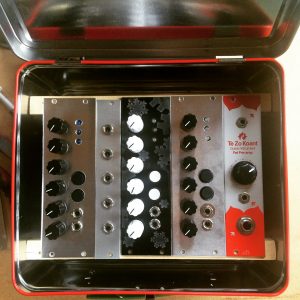