Cutlasses and R.Dyer live in the Lockdown Lounge

Thanks to all of that ‘attended’ our performance last night. Combining a fairly involved audio setup with a 2 camera visual setup was quite tricky, and I was a little nervous about it all, but it all seemed to go down ok.

Everything in this case is DIY (including the case itself). It all starts with the Befaco Instrument Interface, that’s the pre-amp for my guitar, and all the other instruments. After that, everything is going through an effects loop of guitar pedals (DOD volume pedal, Devi Ever Shoe Gazer, EHX Memory Man with Hazarai, Digitech Hardwire Reverb) via a Syinsi pedal i/o 1U tile. I was originally using my Khronos module for the delay->reverb, but actually the Teensy DAC was just too noisy, and seems to be noiser now than ever, possibly because I’m running a lot of modules from a cheap power supply board. I will make something similar using a module with an external audio codec at some point. After that the sound is routed to the modules I’ve designed, Glitch Delay, Audio Freeze, and 2 Looper modules. These form the core of my sound. I have the Foxfield Gearbox as the master clock. The Music Thing Turing Machine with Pulses is sending triggers to the looper to randomly cut up the loop. My alternate RadioDrum firmware for the RadioMusic, is providing all the drum sounds. The Befaco ADSR is responsible for that pulsing distortions at the end of the set. Everything is then routed to my 2 mixers, a passive one that I designed, and the Rakit 5 mixer. Ideally I’d like to get a eurorack mixer with some EQ, I’ve got my eye on the Befaco Hex Mix, but it looks like quite an involved build, so need to find the time. See here for more details on the modules I’ve designed and the piezo noise boxes. 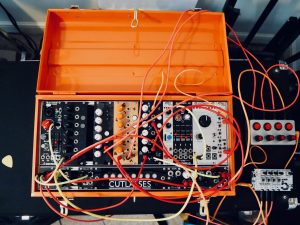